Beyond the Data: Whale-Watching on Dry Land

Camp can be hard to sum up, even for researchers. So many of the wonderful, valuable moments that happen at camp are hard to quantify or even photograph – blink and you’ll miss them. Data and still images can’t always capture the meaningful words in a counselor-camper exchange or the pure joy and accomplishment of a child hitting the archery bullseye after countless tries.

That’s why we’re introducing Beyond The Data posts – to share stories with you about what happens at camp and what it means to us.

Hello readers! For this post I’ll be sharing a memory from my time at camp, so let me briefly introduce myself. My name is Steph, and I spent twelve summers at Camp Kinneret as a counselor, leadership team member, and eventually co-director. For many of my summers on the leadership team I supported our Navajo (4th-9th grade) groups, working with campers right on the cusp of middle or high school and the counselors who guided them. This is a story about middle school boys, social skills, and knock knock jokes…

In the summer of 2014 we had added a new activity to our Initiatives, or team-building, area. It’s known as the Whale Watch, and you can see it pictured at the top of this post. Basically, it’s a balance board large enough to fit whole groups of campers, who can complete all sorts of teamwork and communication challenges on it together. One afternoon I headed up to the Initiatives area, knowing that B9 (our 6th and 7th grade boys’ group) was scheduled to be up there. I was hustling a little, because the activity period had just ended and I wanted to make sure I caught the counselor to pass on a quick update from one of the boys’ parents. 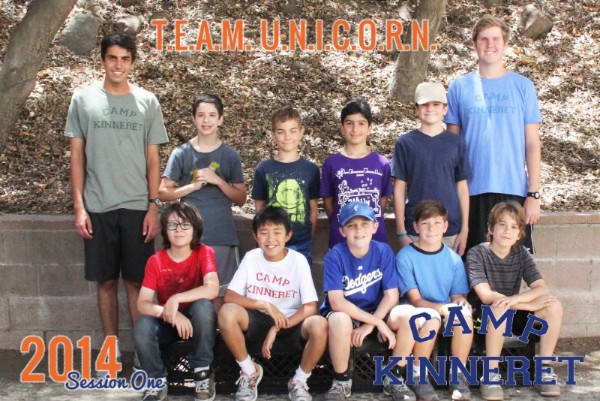 When I got there, I realized there had been no need to hustle. The boys, about 9 of them, were sitting on the Whale Watch, keeping it balanced with both ends lifted off the ground. Their college-aged counselor and their high school camp intern (or CILT) were sitting on crates they’d pulled over next to the balance board. The boys were used to me dropping in throughout the day, so they said a quick hi before resuming their conversation. David, their counselor, filled me in – they were trying to set the camp record for keeping the Whale Watch balanced. They had looked at their schedule earlier in the day and voted as a group to double up their Initiatives period to go for the record. They had also planned ahead, with the boys discussing strategy and taking a trip to use the bathrooms and collect water immediately beforehand. David was keeping the time. By the time I got to them, they’d been balanced for about 20 minutes already.

I can’t remember the record they eventually set, although I think it was somewhere in the high 40 minutes. But I do remember that the boys sat there for that entire time, with nothing but a stop watch, their counselor’s clipboard, and their water bottles. No cell phones, no tablets, no video games. And not a single complaint – at no point did any camper ask to get off or express any boredom. They were all equally committed to a group goal, and were genuinely happy to pass the time in each other’s company. They played 20 questions, they bantered with their counselor, they jokingly awarded ‘CILT points’ for the tasks their high school camp intern had completed that day… At one point I remember the group having a lengthy discussion about what you can or can’t microwave. They told knock knock jokes and ‘B9 jokes’ – bad jokes that were clean and appropriate for camp and distinguished by how corny they were. Here’s a sample:

Knock knock-
Who’s there?
Who.
Who who?
Umm, actually, it’s whom.

There were multiple moments that they laughed so hard that the record was in peril and the balance board almost hit the ground. But they were patient, and persistent, and they were proud when they finally disembarked.

I loved sitting up there with them, and not just because it was a rare chance to sit down for more than a few minutes as a leadership team member! Yes, it was a great example of all those natural opportunities to build SEL skills and sub-skills that we’ve been researching. Their counselor had empowered them to set a group goal, alter their schedule, and devise a strategy – that’s voice and choice and initiative for you. The challenge required teamwork and collaboration; they got to practice affective engagement and emotional management by experiencing how to have fun and allay boredom without phones, screens, or even much equipment; and 40+ minutes of middle school boys getting along without a second of angst? Talk about social skills. But more than anything I loved it because it was just so… camp. These were boys who went to different schools, had different interests, and who mainly only saw each other in the summer. But there they were, with a counselor who had carefully crafted a group dynamic based on rapport and support and who had somehow convinced them that, as the oldest boys’ group in camp, the ‘cool’ thing to do would be to sit outside on a wooden board and talk to each other. He was right, too – it was one of the coolest moments I’ve seen during my summers at camp.

This website uses cookies to improve your experience while you navigate through the website. Out of these, the cookies that are categorized as necessary are stored on your browser as they are essential for the working of basic functionalities of the website. We also use third-party cookies that help us analyze and understand how you use this website. These cookies will be stored in your browser only with your consent. You also have the option to opt-out of these cookies. But opting out of some of these cookies may affect your browsing experience.
Necessary Always Enabled
Necessary cookies are absolutely essential for the website to function properly. This category only includes cookies that ensures basic functionalities and security features of the website. These cookies do not store any personal information.
Non-necessary
Any cookies that may not be particularly necessary for the website to function and is used specifically to collect user personal data via analytics, ads, other embedded contents are termed as non-necessary cookies. It is mandatory to procure user consent prior to running these cookies on your website.
SAVE & ACCEPT